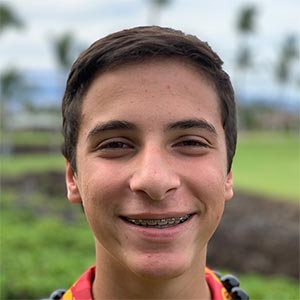 Sixteen-year-old Ethan is one of Ke Kula Mele's next generation steel guitar players. Ethan plays many instruments including ‘ukulele, trumpet, and drums and has been making music since he was just two years old. He started playing steel guitar after approaching Kumu Alan Akaka during the 2018 Hawai‘i Island steel guitar festival.

Ethan lives on Hawai‘i Island and attends Hawaii Preparatory Academy. His favorite subject is science with an emphasis on malama ‘aina. He is currently conducting independent research using drones to monitor air quality. He also helps monitor the local honu population for a NOAA sponsored school research program. In his free time, Ethan likes to fly drones, play music, go to the beach, hang out with his friends, play with his dog, and play tennis. Ethan has played tennis since he was three and plays in USTA tournaments. He also plays varsity tennis for his school's team, which won the Big Island Championship in 2018.

Ethan is immersed in many aspects of Hawaiian culture, and his Hawaiian language class is one of his favorite classes at HPA. Ethan has been playing and listening to traditional Hawaiian music for most of his life and is proud to be a kika kila (steel guitar) player.