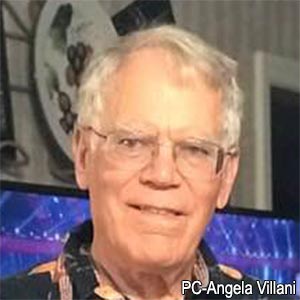 Dr. Dan Villani is a retired rocket scientist who bought a $5 guitar from a high school buddy in 1962 because it looked like fun and maybe it would impress girls.

Four years later, he was jamming with a group of friends including a Ms. Angela Miller who was a Beatles fan. He was the only one there who knew "Norwegian Wood," Apparently he impressed Ms. Miller because she has been Mrs. Villani for slightly over 51 years.

Dr. Villani has been taking Skype lessons for about five years from Kumu Alan Akaka and hopes that some day he will sound as good as Alan's keiki students sound after six months. In the meantime, he, Angie (who plays ki ho'alu), and several of their friends are having fun doing kanikapila together.