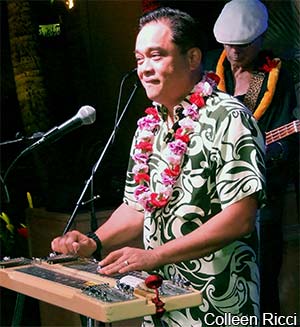 Edward Punua, a Certified Public Accountant by trade, is a co-coordinator of Ke Kula Mele's STEEL the ONE! program on Kauai. He studied with Barney Isaacs and has been performing on Kauai as well as South Korea, Japan, Hong Kong, Tahiti and the U.S. mainland.

Since the age of seven, his musical upbringing was encouraged and enhanced by performing in a Polynesian show with his family for the Victor Punua Polynesian Revue. It is there that he gained much experience with Polynesian music as a percussionist. Punua has instructional experience assisting his mother, Kumu Hula Ku'ulei Punua who taught the hula on Kauai for over forty years.

Copyright ©2018 by Hawaii Institute for Music Enrichment and Learning Experiences, Inc., and Cyberventures Unlimited.Terms of Use