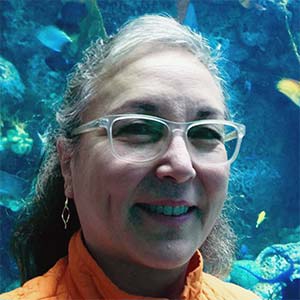 Rhonda grew up in the Midwest listening to the hapa haole music which was popular at the time her father left O'ahu to attend university in Nebraska. When she was 9 years old Rhonda started playing the cello, soon outpacing the program at her elementary school and beginning private lessons with a member of the Omaha Symphony. A year later her family moved to Southern California and she took lessons with Edwin Geber of the Los Angeles Philharmonic, continuing with him until she made the change from music to science in college. When Rhonda began her graduate studies in biology she retired from classical music, stepping down as the principal cellist with the West Valley Chamber Orchestra and the Pierce College Community Orchestra.

Enjoying a long and rewarding career as the Laboratory Manager for the introductory biology lab classes at UCLA, Rhonda started to become interested in getting back into performance music. This time however, she wanted to try out other genres. In June 2013 a trip to North Carolina to visit a friend resulted in Rhonda finding luthier Richard Shook, and returning home with one of his Appalachian mountain dulcimers. A few months later Rhonda attended Joellen Lapidus' LA Mountain Dulcimer Club, following it up with some private lessons and competing in the Topanga Banjo Fiddle Contest in May 2014 and again in May 2015. Rhonda performed with the LA Mountain Dulcimer Club in their first public appearance at the Southern California Dulcimer Heritage Harvest Festival in October 2015. They will be performing as a group at the 2016 Topanga Banjo Fiddle Contest, where Rhonda plans to compete again on solo dulcimer.

During the time Rhonda was learning about the dulcimer, she first heard of Aloha Music Camp. February 2014 found her on Kaua'i, seeking out the lap steel guitar teacher, Kumu Alan Akaka, and asking what the strings should be tuned to. That led to AMC 2015. When that led to signing up for AMC 2016, Rhonda decided it was time to stop being a dilettante and become a rank amateur. In October 2015 Rhonda began taking Skype lessons with Kumu Alan. She has been not only enjoying the musical education she is receiving from him, but also the insight into all things aloha that comes from talk story during the lessons.

Rhonda continues to enjoy playing both the mountain dulcimer and the lap steel guitar. Her favorite color is orange.

Copyright ©2016 by Hawaii Institute for Music Enrichment and Learning Experiences, Inc., and Cyberventures Unlimited.Terms of Use